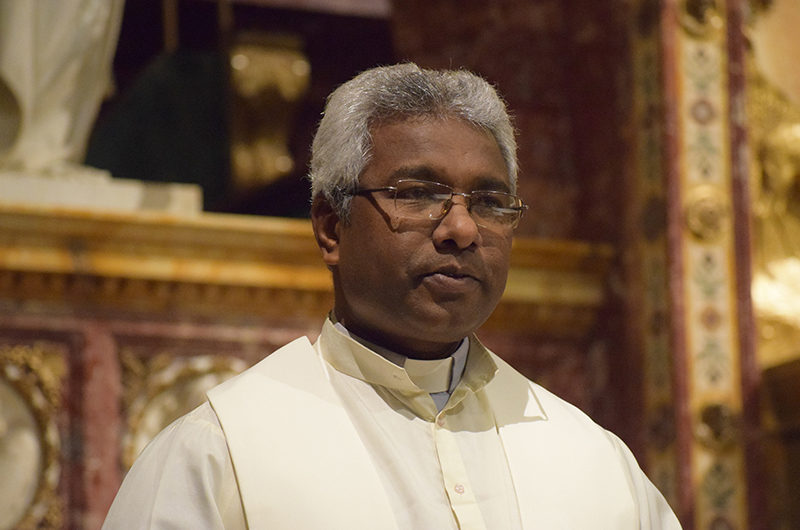 Father Joseph Pauria was installed as the 17th Provincial of the Salesian Province of Kolkata on 17 May 2020 at the Basilica of Mary Help of Christians,Turin-Italy  Father Guillermo Basa�es, former General Councillor for Missions presided at the ceremony.

''Father Joseph Pauria becomes the first provincial whose installation takes place outside his province,'' said Father Basa�es, in his opening remarks. Father Nirmol Gomes, the outgoing Provincial along with Father Basa�es, ceremonially led Father Pauria, to accept the duty of the Provincial. Father Gomes said, ''I am grateful to God for his accompaniment and grace during the years of my ministry as Provincial. Now I ask the Lord to be close to Father Pauria and fill him with grace so that he feels His presence,''

In an emotion charged ambient, standing in the Pinardi Chapel of Don Bosco, the former Provincial said, ''We are proud that in Father Pauria we have a fruit of our labour in mission, as the first Santhal Provincial.'' Father Pauria responded with, ''I am grateful to the Rector Major for the appointment, Father Nirmol Gomes for companionship, the missionaries among the Santhals, and all the Salesians in the province. I salute the missionaries who have laboured in Salesian service and inspired me during the 55 years of my life.''

Nearly 60 Salesians including more than 14 provincials and 40 members of the recently concluded  General Chapter joined in the Vespers to pray for the new Provincial of Kolkata, known as the 'mother province' in India. During the signing the official document, the whole assembly broke into a choral rendition imploring God's choicest blessings on the 17th provincial of Salesian Province of Kolkata.

Father Ivo Coelho, the General Councillor for Formation congratulated Father Pauria and said, ''you have the great fortune of being installed in the mother house at Valdocco, after the long retreat of two months of lockdown.'' Father Biju Michael, General Councillor for South Asia Region said, ''We look forward to great opportunities for Salesian missions and catechetics in our region under the leadership of Father Pauria in Kolkata.'' Former South Asia regional and newly appointed Superior of the UPS ViceProvince, Father Maria Arokiam Kanaga said, ''I am happy for Father Pauria and the province of Kolkata. He will make himself loved like Don Rua, in the way Don Bosco had advised Don Rua, when he became the Rector of Mirabello.''


Greetings and good wishes poured into the mailboxes of Father Pauria in Valodocco and particularly from India. Several videos containing songs and messages of congratulations for the new Provincial were sent by the young people from the province. Father Sunil Kerketta, the Vice Provincial said in a video message, ''We convey best wishes to you for the next six years and expect your return with good health to the province.'' The Director of Novices at Dhajea, Father Samuel Mondal said, ''We rejoice at the installation of the new Provincial and pray that Mary Help of Christians and Don Bosco guide him.''

Father Guido Errico, the Rector and the community of the Basilica of Mary Help of Christians hosted the ceremony with alacrity, a much-needed respite in the long national lockdown. Father Joseph Pauria's ceremonial bonding of provincial leadership at Valdocco, the heart of Salesian mission offers much needed hopeful celebration in the face of the doleful travel restrictions due to the current global pandemic.